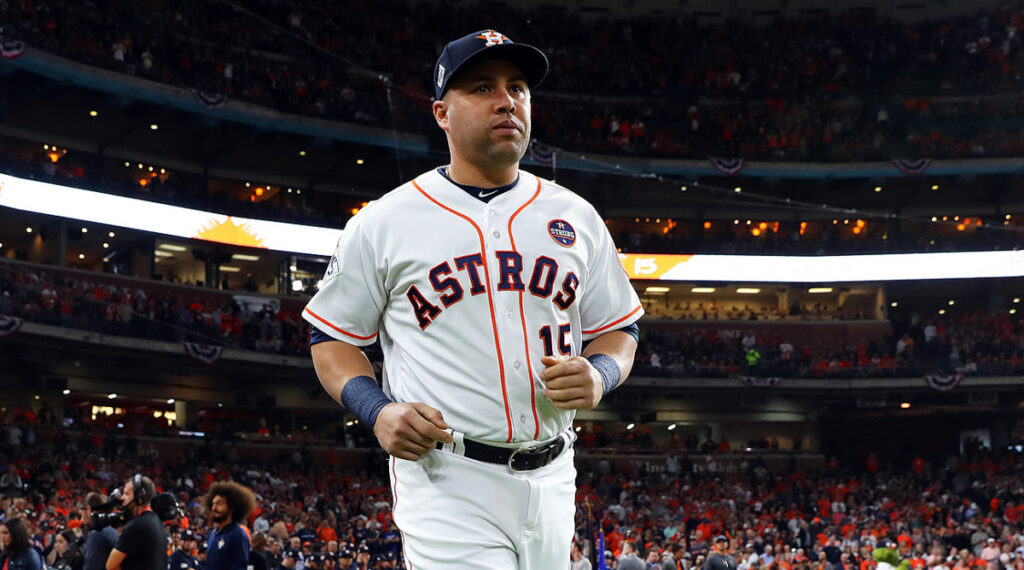 Today, we look at a whole team of former All-Stars who won World Series rings while as bench players.

This is the debut of “Don’t Got No Sports,” an occasional foray by me into a discussion about sports, which technically IS part of pop culture, but I’ll admit is very different from the stuff that I normally cover here, hence it receiving its own feature. Besides my pop culture and comic book writing, I also manage two sports blogs, one for the Yankees and one for the Knicks. So occasionally I’ll have something I feel like writing about sports (that isn’t specifically about the Yankees or Knicks, as obviously I would just write those things there).

I did each position, plus a starting five rotation, a closer and a setup man.

Jim Kaat – The recently elected Hall of Famer threw 2.1 innings for the Cardinals in 1982 when he was 43 years old.
Joe Niekro – The knuckleballer (whose brother Phil is a Hall of Famer) threw 2 innings for the Twins in 1987 when he was just shy of his 43rd birthday.
Bob Veale – The former strikeout ace (who led the National League in strikeouts in 1964, no small feat considering #2-5 were Bob Gibson, Don Drysdale, Sandy Koufax and Jim Bunning) was a two-time All-Star for the Pirates in the 1960s, but injuries had left him working out of the bullpen by the time the Pirates won the World Series in 1971. He faced just five batters and picked up two outs during the series.
Greg Swindell – Swindell was a mainstay of the Cleveland Indians rotation in the 1980s, making the All-Star team in 1989. In the mid-1990, he transitioned to being a bullpen lefty and it was in this role that he won a ring with the Arizona Diamondbacks in 2001, tossing 2.2 innings in that Series. That same series also saw 41-year-old former All-Star Mike Morgan win his first ring after making his postseason debut at 38! Morgan, though, played a much bigger role than Swindell in the series, so he wasn’t eligible for the list).
Jake Westbrook – Traded by the Yankees to the Indians for David Justice, Westbrook settled in for a long stint as a starter for the Indians, including an All-Star appearance in 2004. In the final year of his Cleveland contract, he was dealt at the trade deadline to the Cardinals. He resigned with them and actually started 33 games in 2011, but became a bench player in the playoffs, not even seeing action in the first two rounds of the playoffs. However, he famously pitched 2 innings in the 2011 World Series, including being the winning pitcher in the historic Game 6 come-from-behind victory by the Cardinals, the first time a team ever scored runs in the 8th, 9th, 10th AND 11th innings of a playoff game).

Eric Gagne – Gagne was a dominant closer for the Dodgers, even winning the Cy Young Award in 2003. However, he hurt his knee in Spring Training in 2005, tried to play through it and hurt his arm and missed most of the season. He then missed almost all of 2006, as well, leading to the Dodgers letting him go. He signed a make-good deal with the Texas Rangers and, well, made good. He pitched very well for the Rangers and was a leading trade target at the deadline that year. The Red Sox gave up a haul for him to make their bullpen stacked. However, he instead was terrible for the Red Sox, including the playoffs. So he got just a single inning during the Red Sox 2007 World Series victory).

Arthur Rhodes – Rhodes won a ring with the Cardinals in 2011 when he was 41 years old, throwing just 1 inning in the series. The age might fool you a bit to thinking that he was just hanging around, but he had actually just made the All-Star team for the first time the previous year when he was 40! 2011 was his final season, though. He retired on top.

Dave Duncan – Okay, this one is a bit of a cheat. Duncan was still in his prime when he won a World Series with the Oakland Athletics in 1972. He had just made the All-Star team the previous year. However, the Athletics liked Gene Tenace better as their backstop, so Duncan was benched and only got five at-bats in the 1972 World Series and he was then dealt in the offseason to a team looking to start Duncan. After he retired, Duncan became one of the most acclaimed pitching coaches in baseball history.

Dale Long – Long made MLB history in 1956, the same year he made his lone All-Star appearance. In that season, he hit a home run in eight consecutive games, a record that remains intact to this day (Don Mattingly and Ken Griffey Jr. have both since tied it). He ended his career as a backup first baseman for the Yankees, winning a ring with the Yanks in 1962 (he actually DID get one start in Game 2 of the 1962 Series, but then he sat the rest of the SEries).

Ian Kinsler – This one was tricky since there were a lot of good choices (Brian Dozier is another one that stood out), but Kinsler was ultimately the best guy. He was a three-time All-Star for the Texas Rangers who signed a big money free agent deal with the Detroit Tigers, making a fourth All-Star team in his first season there. By 2018, though, he was almost out of baseball and got just three at-bats for the Red Sox in the World Series.

Roy Smalley – Smalley had an excellent end of the 1970s for the Minnesota Twins as their shortstop, making the All-Star team in 1979. The Twins dealt him to the Yankees in 1982 for quite a haul. He played well for the Yankees in his first two seasons there but faltered in 1984. The Yankees traded him to the White Sox and the ChiSox then dealt him back to the Twins in the offseason. However, by that point, one of the players that the Twins had received from the Yankees for Smalley, Greg Gagne, had taken over as the everyday shortstop, so Smalley mostly DHed, which was a bit of an odd role for a former shortstop. The Twins acquired DH Don Baylor at the trade deadline in 1987 and Baylor became their primary DH in the postseason, with Smalley receiving just two at-bats.

Pat Tabler – Tabler was mostly a first baseman, but hey, he DID play 99 games at third, so I’m counting him. Tabler was one of the faces of the “Oh wait, are the Indians actually going to be good now?” in 1987, along with the main three guys – Cory Snyder, Brook Jacoby and Joe Carter (Snyder, Jacoby and Carter each hit over 30 homers in 1987) and, well, they were not good. He ended up on the Blue Jays in 1991 as John Olerud’s backup at first base and won a ring with the Blue Jays in 1992, seeing 2 at-bats in the World Series.

Hal McCrae – McCrae was a stalwart member of the Kansas City Royals for many years, but by the end of the 1970s, he was a full-time Designated Hitter and when the Royals won the World Series in 1985, it was the final year that the designated hitter wasn’t used in odd-numbered years (starting in 1986, the designated hitter was used in all World Series whenever the game was played in an American League park). McRae was towards the end of his career, so he wasn’t a guy you’d try to play in the outfield, so he only saw 1 pinch-hitting at-bat in the Series. If you think that a rule fluke shouldn’t count, then you could put Geoff Jenkins here, instead, an All-Star for the Milwaukee Brewers who ended his career as a bench player for the Philadelphia Phillies when they won the World Series in 2007.

Reggie Smith – One of the most underrated players of the 1960s and 1970s, Reggie Smith was a seven-time All-Star, including two for his original team, the Boston Red Sox, two for his next team, the St. Louis Cardinals and then three for his next team, the Los Angeles Dodgers. He had made the All-Star team in 1980, but injuries forced him to only pinch-hitting duty in 1981 (he did remain in a game twice to play first base), so he only saw two at-bats in the 1981 World Series, but he did get a hit, at least!

Carlos Beltran – Beltran was a nine-time All-Star who was famous for the fact that, despite never winning a World Series in his prime, being really good in the playoffs, including a historic 2004 postseason where he hit EIGHT home runs in the first two rounds of the postseason before the Astros were eliminated in the NLCS. He made the All-Star team again as a right fielder for the Yankees in 2016, before being dealt to the Rangers at the trade deadline. The Astros re-signed him, mostly for his veteran leadership, and he saw only 3 at-bats for the Astros as they won the World Series in 2017. He retired after the season.

To Go With 38 At the Garden, Discover the Knicks’ First Asian-American Player

To Go With 38 At the Garden, Discover the Knicks’ First Asian-American Player