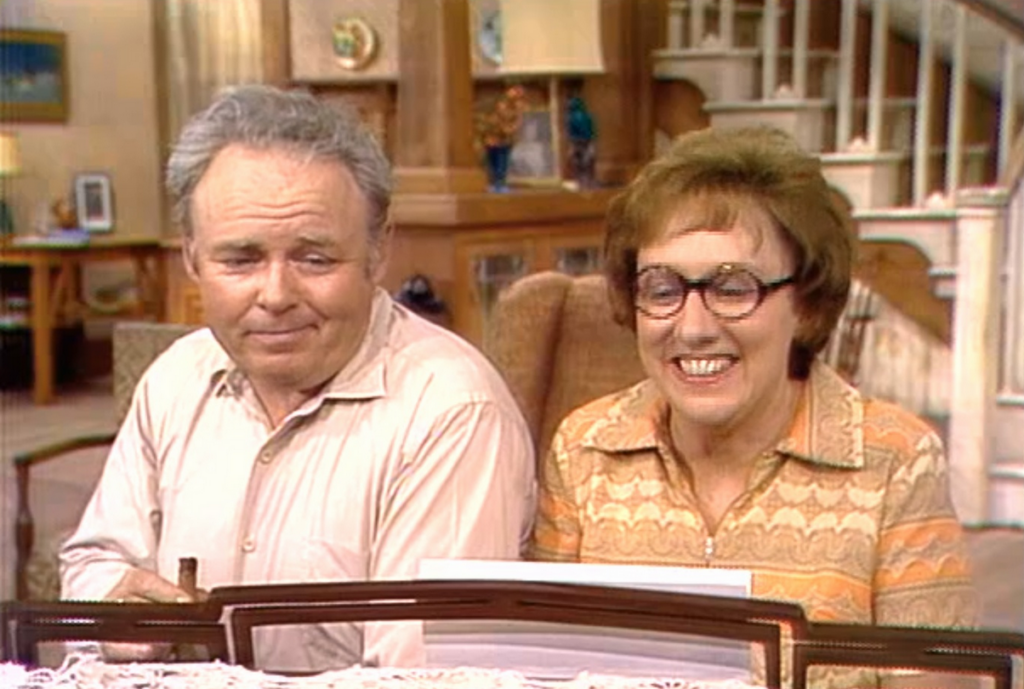 Today, we look at the clever satirical lyrics of the theme song to All in the Family.

This is “Theme of a Melody,” a feature where I examine the background behind famous TV theme songs.

One of the most famous TV theme songs, All in the Family‘s “Those Were the Days” is also one of the more misunderstood songs, become more famous for HOW the song is presented than the lyrics themselves.

The song, of course, is sung by Carroll O’Connor and Jean Stapleton in character as Archie and Edith Bunker, sitting at the family piano…

That idea (to have the song done by the leads of the show instead of an outside singer) was that of Charles Strouse, who wrote the music for the song with his writing partner, lyricist Lee Adams. Strouse recalled his family gathering by the family piano to sing the popular songs of the day when he was a kid and he thought it would be a nice touch. Strouse is playing the piano for the song, as well (at least originally).

Strouse and Adams were working with Norman Lear on a movie (The Night They Raided Minsky’s) when Lear told them about his new television project and when he showed them the script they, like many Americans, were shocked at the language that they were using on the show (Archie Bunker uses a number of racial epithets during the series).

Still, Strouse and Adams (who are most famous for doing the music and lyrics for Bye Bye Birdie, but they did a number of other musicals, including the Superman musical, It’s a Bird…It’s a Plane…It’s Superman. Strouse, of course, is most famous for writing the music for Annie) were glad to do the theme and they came up with the aforementioned “sitting around the piano” concept, but moreover, writing a song that to the general public, seemed like two people pining for the “good old days,” but Adams intentionally added satirical stuff like “Mister we could use a man like Herbert Hoover again,” which, of course, no one was actually missing. You see, Adams’ concept was to come up with stuff that specifically a moronic bigot would be nostalgic for, hence having them pine for the days of Herbert Hoover.

It’s subtle, and Strouse’s melody is so well written that to a good deal of viewers, it just seemed like an actual song from the past about the good old days and Adams does it so subtly (by throwing in stuff that EVERYONE from the past enjoyed, like Glenn Miller’s songs, which is so general that it’s basically meaningless) that most people don’t get that Adams is mocking Archie with the song.

Go here to hear more from Strouse and Adams about the song (both Strouse and Adams, as of September 16, 2021, are still with us luckily. I missed out on the chance years ago to meet Strouse while he was workshopping a new version of It’s a Bird…It’s a Plane…It’s Superman with Roberto Aguirre-Sacasa . I didn’t get Roberto’s invite until it was too late. One of my biggest professional regrets).

If anyone has a suggestion for a theme song that you’d like to hear more about, drop me a line at brian@popculturereferences.com

Tags: "Those Were The Days" All in the Family Charles Strouse Lee Adams