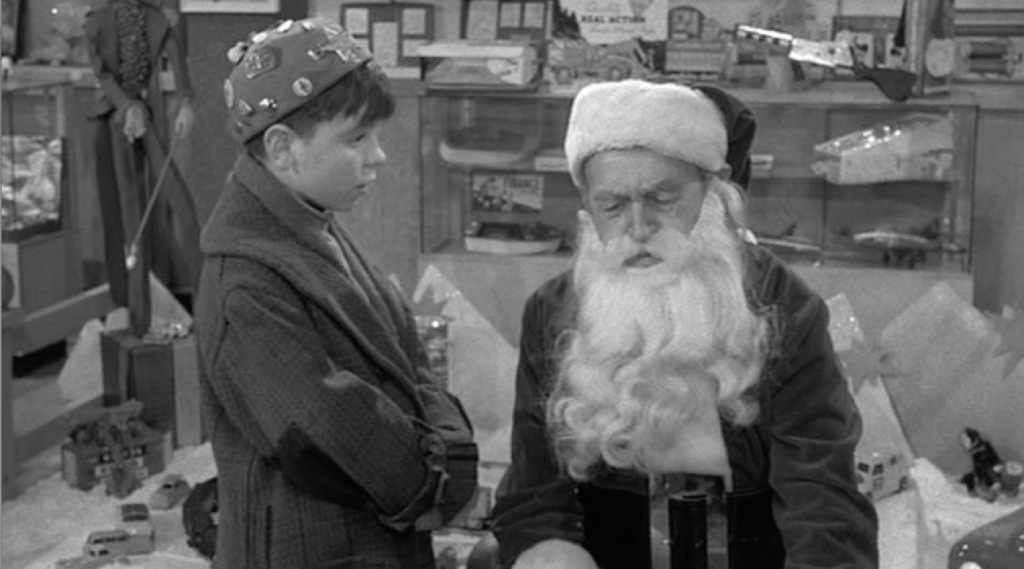 We continue our countdown of my favorite 1950s Christmas TV episodes with 1955’s “Santa Claus and the Tenth Avenue Kid” from Alfred Hitchcock Presents.

Perhaps no series is harder to rank on this sort of thing than Alfred Hitchcock Presents, which did four Christmas episodes, but boy, most of them are so bleak. Two of them I can’t even really put on to this list as they’re SUPER bleak and not even particularly good.

So that’s why it is rough that the only truly sentimental one of the four episodes, “Santa Claus and the Tenth Avenue Kid,” really isn’t all that great.

The concept is exceptionally straightforward, where Irish actor Barry Fitzgerald plays a thief on parole who gets a job as a mall Santa Claus. The episode cleverly shows us his thoughts throughout the episode where he thinks about how much he hates the job.

Fitzgerald (who has the honor of being the only person to be nominated for a Best Actor Oscar AND a Best Supporting Actor Oscar for the same role. They quickly changed the rules to ban that from happening ever again) was such a good actor that he basically became a stereotype. Films were casting “A Barry Fitzgerald type” for years to come.

However, while Fitzgerald is great, the character is fairly ill-defined. There is one kid who reminds him of himself. This kid is shoplifting and gives Fitzgerald a speech about how fake Santa Claus is.

It’s really not explained why he decided to steal the fancy toy jet that the kid wants and break into the kid’s apartment to give it to him.

He’s caught by the police as he’s leaving the boy’s apartment, (dressed as Santa), but his parole officer gives him an alibi.

It’s supposed to be sweet, but the show doesn’t do a good job of showing why the parole officer has so much faith in him. It isn’t even made clear that she knows that he was trying to be a good guy by giving the toy to the kid. I mean, it just makes logical sense, of course, but it is oddly unclear in the episode.

Still, Fitzgerald is a great actor and at least it’s heartwarming (a non-heartwarming episode from this series is still to come, but it’s top good not to rank it).