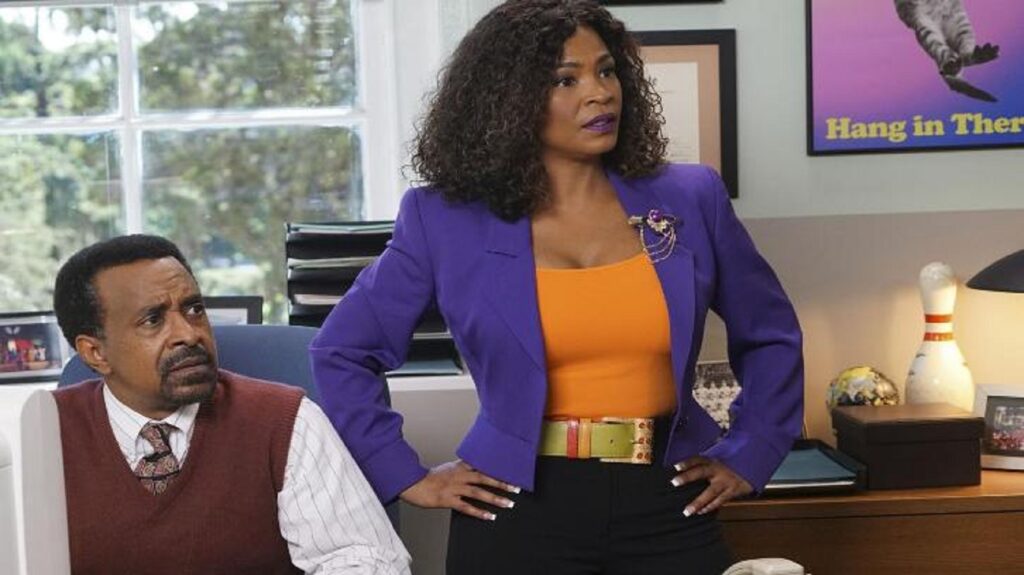 Today, we look at the odd way that the spinoff of The Goldbergs, Schooled, made its way to the air.

CONCEPT: Schooled, following the teachers at William Penn Academy in the 1990s

SERIES IT AIRED ON The Goldbergs

The concept of the hit long-running ABC sitcom, The Goldbergs, is that we follow the lives of Adam F. Goldberg and his two older siblings through high school and college during the 1980s, all based on Goldberg’s reminiscences of his youth (and, because he wanted to work in film his whole life, he had a video camera around all of the time, so many of his memories could literally be shown on TV at the ends of the episodes to show the real version of the story told in that episode). One of the main shticks of the series is that Goldberg doesn’t necessarily remember everything correctly, dates-wise, as they all sort of blur together, so when Goldberg narrates the story (Patton Oswalt does that actual narration as adult Adam F. Goldberg), he always gives the day as “1980-something.”

Since the show follows Goldberg and his two older siblings (he had two older brothers in real life, Barry and Eric, but on the show, his eldest brother, Eric, became an older sister, Erica) through high school, a key part of the series is the school that they attended, William Penn Academy, and the wacky teachers there (all also based on Goldberg’s actual teachers, using their real names and everything).

Eventually, Goldberg got the idea to do a spinoff of the series spotlighting the teachers set in the 1990s. The show would take Tim Meadows’ school counselor character, John Glascott, and Bryan Callen’s gym coach character, Coach Mellor, and fast forward a few years, with Glascott now becoming the school’s principal. Rounding out the initial cast was Nia Long as Glascott’s sister, who came to work for him as his new secretary, along with her two daughters that she raises with her brother’s help, the rebellious Felicia (played by Rachel Crow) and the dorky Gigi (played by Summer Parker). The first episode has the sister come to work for Glascott and his two nieces agreeing to attend the school.

The pilot tested really well, but ABC passed on it. Since it was filmed anyways, Goldberg decided to air it as basically a special episode of The Goldbergs, sort of a half hour TV movie and so “1990-something” aired in the middle of Season 5 of The Goldbergs. Goldberg hoped that once it aired, the network would change its mind, and sure enough, the network agreed to pick up the show it had previously passed on, but only after some drastic revisions to the setup of the series. Out were Long and Parker (and Crow’s Felicia was bumped down to just a minor recurring character) and in was AJ Michalka, a regular character on The Goldbergs as the best friend of Erica Goldberg and the girlfriend (and briefly fiancee) of Barry Goldberg, who was now playing her character of Lainey Lewis as in her late 20s as she decides to come back to her old school to become the new, hip music teacher (Brett Dier was also added as the OTHER young, hip teacher, C.B.).

This version of Schooled (which I can’t help but notice went from being a Black-centric cast to a White-centric one) was picked up as a midseason replacement during the middle of Season 6 of The Goldbergs (The bizarre way that Michalka was then written off of The Goldbergs deserves its own post, which I’ll do someday). Schooled was renewed for a second season, but ended after just two seasons

DID THE PILOT GO TO SERIES? No, but then Yes

SHOULD IT HAVE? Schooled was never quite as good as The Goldbergs and it was canceled after just two seasons, but it was worth a shot. It was also sort of lucky that it was canceled BEFORE the allegations against Bryan Callen went public, at which point he would have had to been written off of Schooled and that would have been a whole thing.