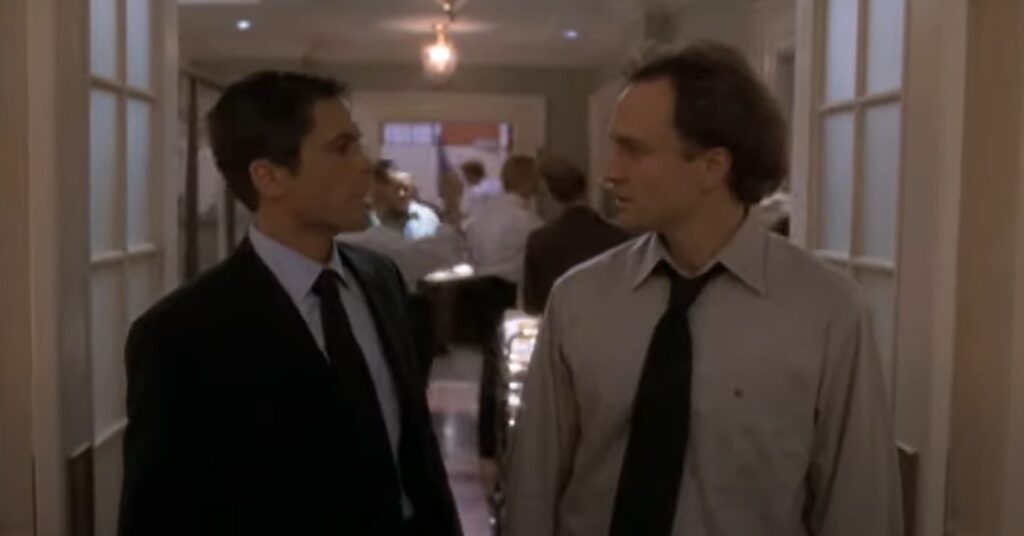 Today, we look at Aaron Sorkin poking fun at the idea of the “walk and talks” on The West Wing just four episodes into the series!

I’m not going to say that most TV writers don’t have personal quirks, because they do. Heck, most writers PERIOD have personal tics. A lot of you have seen my writing for years by this point, for instance, so you certainly must have noticed plenty of personal quirks in my writing. However, there are quirks and then there are those writers whose quirks leap out and scream at you. People like Chris Claremont and Aaron Sorkin, to name two, are writers whose quirks are GLARING. This isn’t necessarily a bad thing, as their quirks can often be endearing. It can be fun to see characters in a Claremont comic book saying, “Bang! You dead” or “No quarter asked, none given,” or, in a Sorkin TV show, talk about, like, Gilbert and Sullivan or whatever.

In any event, on Sorkin’s classic TV series, The West Wing, one of the quickly adopted shticks on the show was that the characters would do “walk and talks,” where the White House staffers would have their debates as they walked from office to office, basically multi-tasking by having work conversations in the offices and then on the way to the other offices. It was a really good way to show how busy they all were, while at the same time, to give some action to what could otherwise be stilted scenes to film.

It was also one of the most wildly parodied aspect of The West Wing, and Sorkin knew how much it stood out, so in just the fourth episode, “Five Voted Down,” Sorkin had some fun with the concept by having Sam (Rob Lowe) and Josh (Bradley Whitford) do a walk and talk where neither man knew where they were going, instead just following the other guy blindly.

Sam: Where are you going?

Josh: Where are you going?

Sam : I was following you.

Josh: I was following you. All right, don’t tell anyone this happened, okay?

Very nice stuff from Sorkin, and SO QUICKLY INTO THE SERIES!