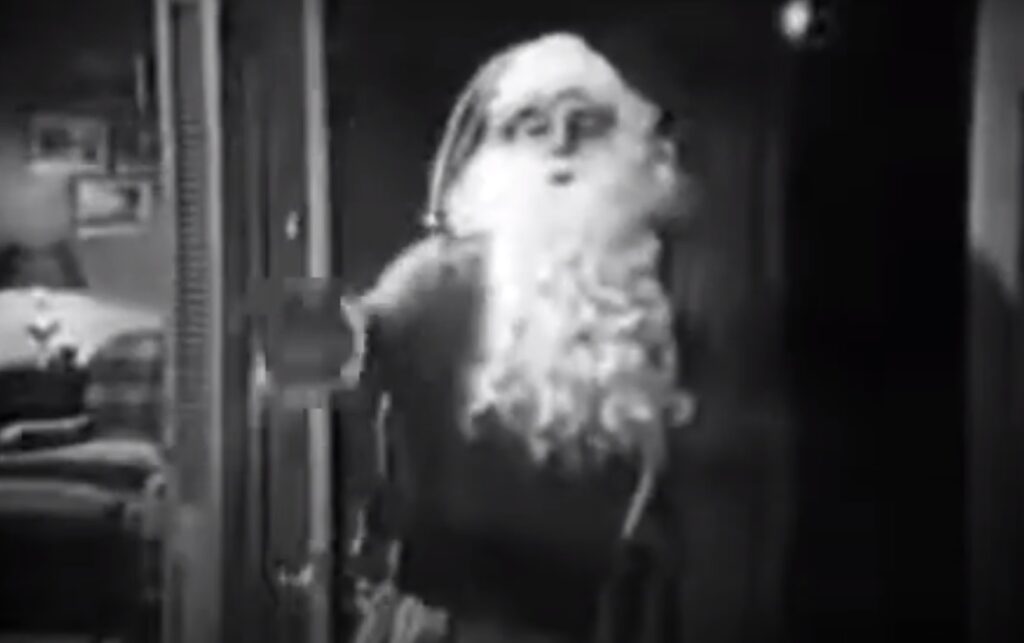 We continue our countdown of my favorite 1950s Christmas TV episodes with 1954’s “The Lost Christmas Gift” from The Adventures of Ozzie and Harriet.

The Adventures of Ozzie & Harriet had a LOT of Christmas episodes over the years, but boy, most of them were not particularly good.

This one, though, from 1954 stood out a bit more for me than the others (and I’ll be honest, Ozzie and Harriet went in on Christmas SO much that I would feel strange not mentioning them at all). In the episode, Ozzie is feeling as though Christmas has lost a little bit of its magic since David and Ricky are now a little bit older and thus don’t get quite as excited as when they were little kids. It almost feels to Ozzie that it’s purely about them just getting the boys “stuff.”

Well, one of that “stuff” is a baseball mitt for Ricky that appears to have vanished. Recently, some deliveries had been accidentally sent to another Nelson family in town. After opening the other gifts, the Nelsons figure it wouldn’t be awful to drop in to at least check with the other family. Once there, they see that the other Nelson is a widow with three young children. The kids are all very happy, but they each received just a single present. Our Nelsons, of course, feel like garbage barging in on this poor lady and looking for ANOTHER present for Ricky while they have so little.

Once they return home, Ricky suggests that they collect some of their presents and bring them to the other Nelsons. Harriet recalls that a recent neighborhood party had given out Christmas presents as novelties (like a toy iron or a small rag doll, stuff like that), and so she goes around to the other houses to collect them and re-gift them to the other family. During all of this, they discover the mitt under the tree. No one knows how they could have missed it. Ricky, though, says to just give the mitt to the other little boy, as well.

David gets a Santa Claus suit and they all drive off to give the presents to the other family. There’s an interesting bit where Ozzie tells Ricky that he’ll buy him another baseball mitt later and Ricky says don’t bother, that it would spoil the feeling of giving if Ricky just got a replacement later. I dunno if that logic holds, but it is interesting nevertheless.

We then learn that the whole thing was a dream by Ozzie, but then it appears that it was a precognitive dream which is…something.

In keeping with the tradition of the Nelsons being played by the actual Nelsons, the OTHER Nelsons in the episode were ALSO played by a real-life cousin of Ozzie and her two little girls. The son, though, was played by a child actor.

This was a strong episode of a series that was not exactly known for having a ton of strong episodes (it was more like comfort food, really, as the Nelsons really were a charming family).

Kind of sort of, as they DO suggest that perhaps Christmas magic was involved in them not seeing Ricky’s mitt.

Tags: "The Lost Christmas Gift" The Adventures of Ozzie and Harriet