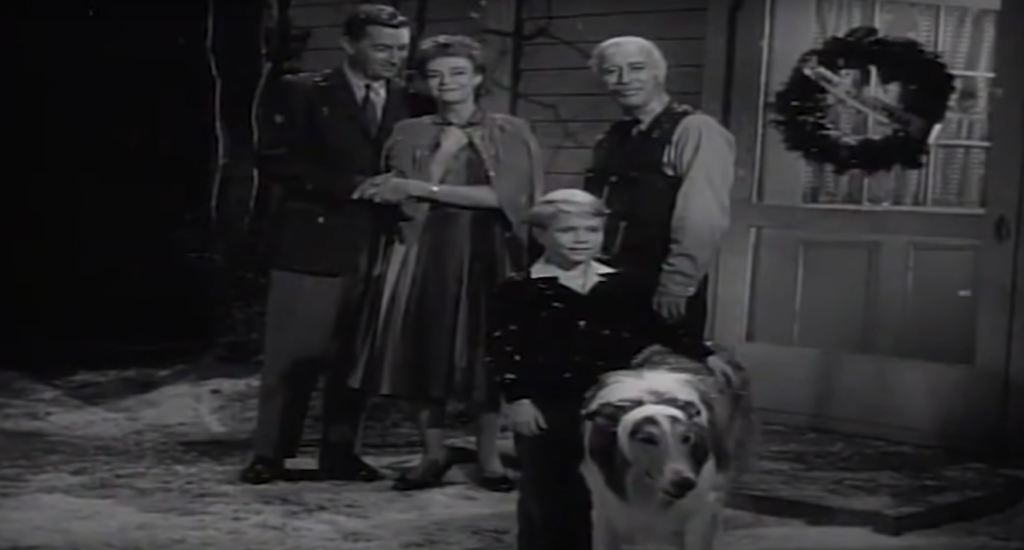 We continue our countdown of my favorite 1950s Christmas TV episodes with 1958’s “A Christmas Story” from Lassie.

One of the most amazing things about the hit TV series about a heroic dog, Lassie, is that the mom on the show, the brilliant June Lockhart, is somehow still with us in 2021. That’s awesome.

Anyhow, this episode opens with Lassie saving a little girl from getting hit by a car, but in the process, Lassie herself is hit by the car. Lassie is discharged from the vet as her injuries don’t appear to be life-threatening at first, but it soon becomes clear that Lassie suffered brain damage in the collision and she is going to die unless someone can operate on her (they’re vague in the episode as to what is precisely wrong with her, but I assume that they need to alleviate pressure on Lassie’s brain from the blood in her head from the injury that is starting to press down on her brain. It was a reasonably standard procedure for humans back in 1958, but certainly not for dogs and the vet only knows of one doctor who has ever done the surgery on a dog, but he is off in Capitol City and cannot be reached.

However, in a clever bit, Timmy’s mother takes advantage of the publicity that Lassie is receiving from, you know, saving a little girl from being killed, and calls the radio station in Capitol City and asks them to broadcast Lassie’s plight in the hopes that the special surgeon hears it and, sure enough, he hears it and drives hours out of his way to perform the surgery on the holiday. And sure enough, Lassie is fine! In a cute scene, the other local kids all bring their own pets to hold a vigil outside while they wait to see if Lassie wakes up (earlier, before the brain trauma is evident, Timmy thinks Lassie is fine and it’s funny when one of his little friends comes over and he’s, like, “Uh, dude, I think your dog is definitely NOT all right.”

In a nice, but odd bit, the woman whose daughter was saved offers to pay the specialist for the surgery, but he insists that he was paid in the prayers people prayed for Lassie (uhmm…okay), but, like, shouldn’t the payment have been addressed BEFORE the guy does brain surgery on a freakin’ DOG?

But whatever, I’m glad that Lassie got out of it all right and it was nice that the lady tried to pay for it. Good for her.