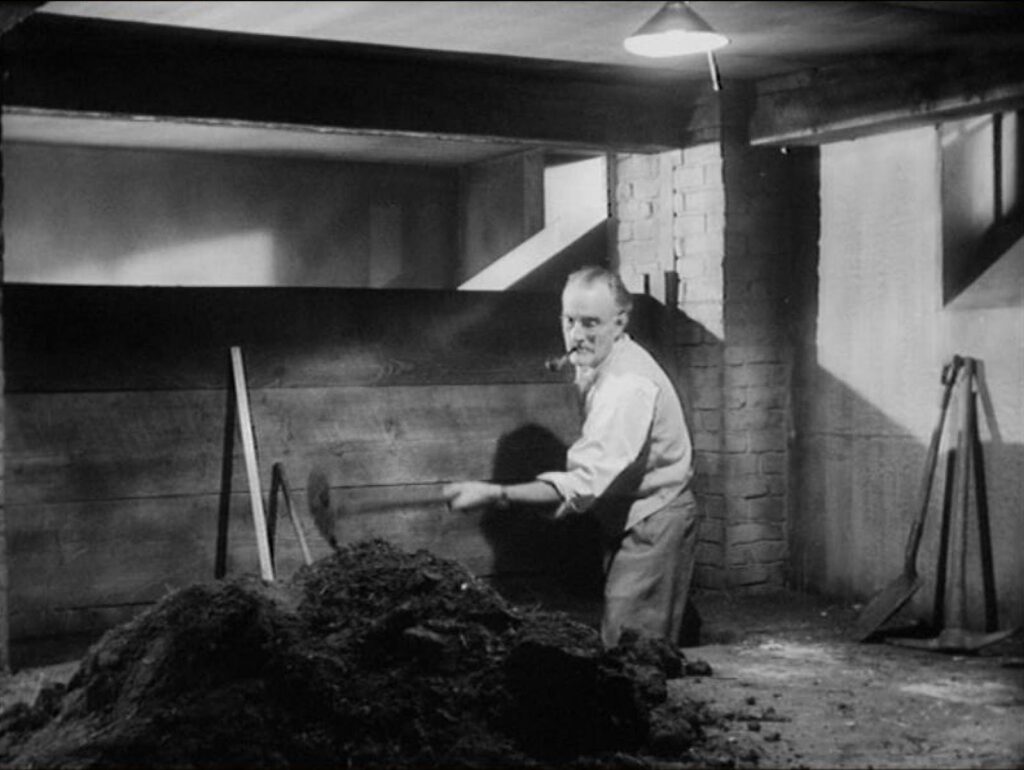 We continue our countdown of my favorite 1950s Christmas TV episodes with 1956’s “Back for Christmas” from Alfred Hitchcock Presents.

This is a tricky one, as as an overall episode of television, “Back for Christmas” is clearly a top five, perhaps top episode PERIOD, of the shows that I’m discussing on this list. However, it’s also extremely non-festive, to the point where it aired in MARCH, for crying out loud! It’s clearly only barely a Christmas episode at all, and as a result, I can only list it as high as #15, despite it being a very good episode of television.

Based on a 1939 short story by John Collier than originally appeared in the New Yorker (and was so instantly beloved that it was adapted into radio three times before it made its TV debut with this episode), the episode stars a man who is digging a hole in the basement of his British country home, nominally to build a wine cellar eventually, but in actuality, he has dug a burial spot for his wife. They are about to go Los Angeles for a work opportunity for him, but plan to “be back for Christmas,” but he obviously has other plans.

The first part of the episode is a clever bit about him constantly being interrupted in his attempts to murder her, and once he has finally murdered her, it seems like any number of things might go wrong and see him caught (like a couple of their friends stopping by for one last drink while he is hiding after having just murdered her, hoping they’ll go away, which they do). So he buries her and heads to America, pretending as if she has come along for the trip (he has her trusty typewriter and he has already penned the first of a series of letters where she will get slowly more enchanted with the idea of remaining in Los Angele permanently).

The man is quite pleased with himself for his cunning when he receives some mail, including a bill sent to his wife. As it turns out, as a Christmas present, she had hired a construction firm before they left to excavate their cellar to make a wine cellar. The man reflects on how his wife was right, he WILL be back home for Christmas.