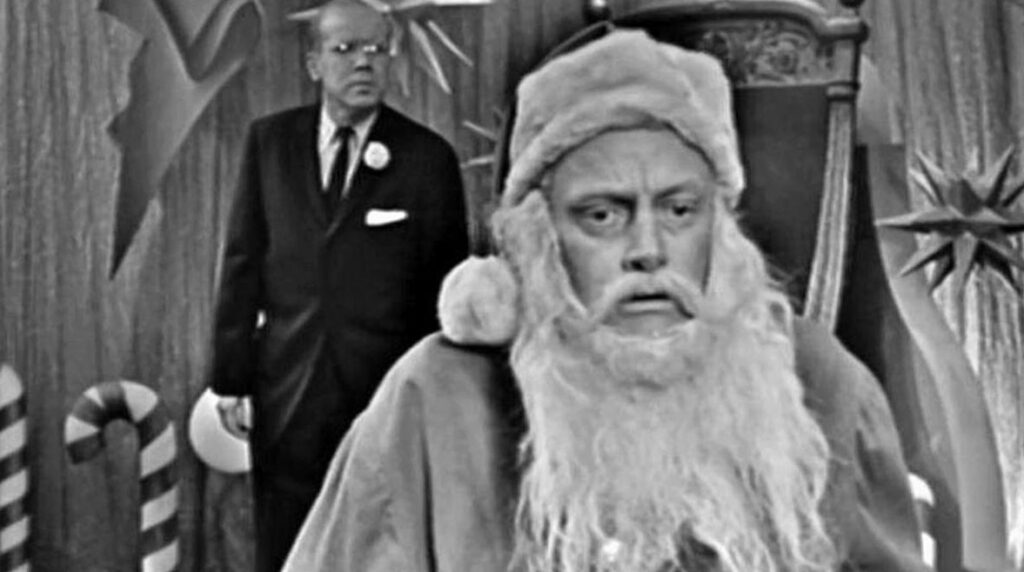 We continue our countdown of Brian’s favorite 1960s Christmas TV episodes with 1960’s “The Night of the Meek” from The Twilight Zone.

There were nominally three Christmas episodes of the iconic science fiction/fantasy TV series, The Twilight Zone, but I dismissed two of them from consideration for this list. Season 3’s “Five Characters in Search of an Exit” is one of the most famous episodes of the series (well, that’s a bit of a stretch, if only because there were just SO MANY famous episodes in the series, but suffice it to say that that “Five Characters in Search of an Exit” is a very notable episode. However, the only connection to Christmas is the reveal at the end that the five disparate “people” who were trapped together were actually all dolls being collected for a Christmas toy collection. So, come on, that’s not a Christmas episode. It’s an incidental connection. Secondly, the Season 3 episode, “The Changing of the Guard,” is closer to being a Christmas episode, but again, the Christmas connection is tenuous, and, most importantly, the episode debuted in JUNE. Clearly, it wasn’t really considered a CHRISTMAS episode (it’s a cool story about an old teacher being pushed to retire who plans on killing himself on Christmas, but is then visited by the ghosts of his former students who have died doing heroic things in World War II and other instances and he realizes he had more of an impact than he thought).

That, then, leaves us to the Season 2 episode, “The Night of the Meek,” where Art Carney plays a drunken bum who volunteers as a department store Santa every year, but he’s such a drunken bum that he gets fired. He wishes, though, that for one night, he would “like to see the meek inherit the earth.”

Suddenly, his Christmas sack can suddenly give out any present people wanted. He loves helping people, and in the end, he actually gets the chance to become the new Santa Claus.

It’s a nice episode. It’s a bit on the simple side of things, but it’s well told. Art Carney was a wonderful actor.

Tags: "The Night of the Meek" Art Carney The Twilight Zone