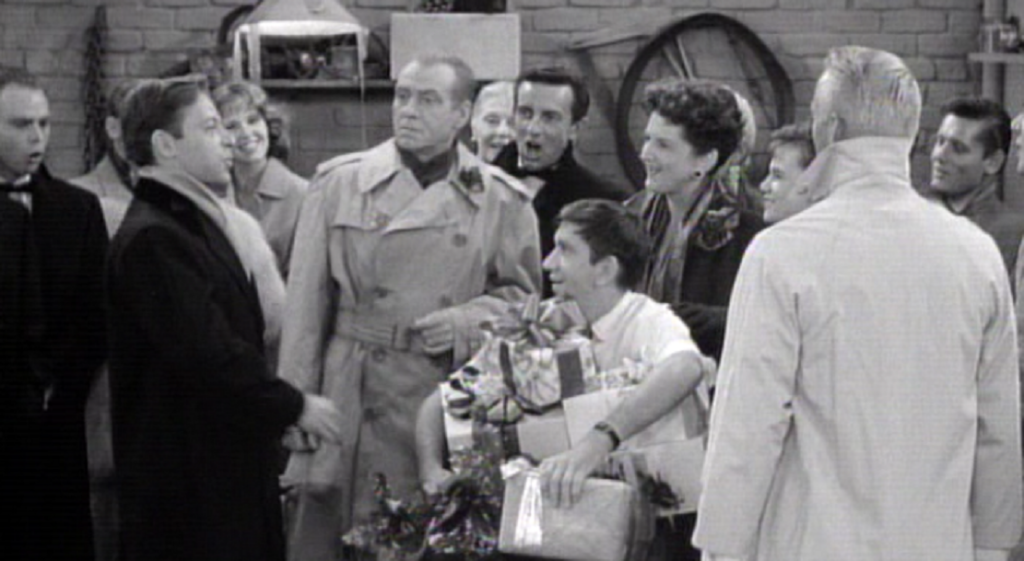 We continue our countdown of my favorite 1960s Christmas TV episodes with 1966’s “Jangle Bells” from The Many Loves of Dobie Gillis.

I’ll be frank, early in the countdown, we’re at a point where you have roughly thirty sitcom episodes for, like, three spots, and choosing between the episodes is very difficult, since most of them are PRETTY good. For instance, Bewitched did three Christmas episodes in the 1960s. Two of them had practically the same plot (Samantha brings someone who doesn’t have Christmas spirit to the North Pole to meet Santa), and they’re all fair enough. The Many Loves of Dobie Gillis, for instance, had three different Christmas episodes that came out in the 1960s. They’re all pretty good. I’d say that it really isn’t until we hit the Top 15 or so that we actually run into episodes that I HAD to include on this countdown because they were just too good to NOT include. So keep that in mind if you’re, like, “But Brian, what about Sitcom X? Or Sitcom Y?” I’m sure they were fine, and I watched them all (I legit watched over 75 Christmas episodes for this countdown – fifteen of them back in October, and then 60+ plus in the last few days before December 1st. That’s how I roll, people!), but none of them were so good that I felt I “had” to include them, and all things being equal, I just went with these shows instead of those. Like I said, Dobie had three 1960s Christmas episodes, who’s to say that this was the best of the three? I think so, but maybe you like another one. Whatever, let’s just talk about a fun Christmas episode.

Dobie Gillis was based on Dobie (played by Dwayne Hickman, who came over from The Bob Cummings Show, where he was the lead character’s nephew) and his best friend, Maynard G. Krebs (a pre-Gilligan’s Island Bob Denver). A major recurring character was Sheila Kuhl’s Zelda, a nerdy girl who was in love with Dobie (Kuhl’s behind the scenes issues were very sad), and another major recurring character was the local rich kid, Chatsworth, who was Dobie’s rival, but also sort of a friend (think Reggie Mantle to Archie Andrews).

Okay, so this Season 2 episode plays with the A Christmas Carol format in a clever way. Maynard reflects on how he is a bit of an outcast, so the Ghost of Christmases Past convinces him that he needs to turn around his behavior, and so he throws a party for his friends. Sadly for him, Chatsworth then throws a Christmas party the same night, and Zelda convinces Dobie that it makes more sense for him to go to Chatsworth’s party, as it will help his social standing more. Dobie agrees, and they both go to the fancy soiree. Maynard, meanwhile, is left alone at his pretty poorly thrown together party, with just a stray alley cat for company (there’s a cute website called Cinema Cats and they got a lot of shots of the cat from the episode. It really IS a cute cat).

Dobie is then visited (in his imagination, naturally) by the Ghosts of Christmases Present and Future, who both look like Maynard), and they convince him he is being a crummy friend, so Dobie leaves the party for Maynard’s party. Zelda and Dobie’s parents come, as well. They all get to Maynard’s crummy party and try to liven the mood. We then get a super cringey moment when Dobie’s dad tells him to sing, as he paid for Dobie’s singing lessons. This is a pretext for Hickman to sing a song off of his then-new album, Dobie. It’s a love song that has NOTHING TO DO WITH CHRISTMAS and is COMPLETELY INAPPRPRIATE FOR THE SCENE. They then finally start singing Christmas songs, and then they’re shocked by the arrival of Chatsworth and his rich friends and family, who decide that it made more sense to bring the party to Maynard.

Adorable stuff, and Denver and Hickman and Kuhl are all so endearing, that you really want to root for them.

Tags: "Jangle Bells" The Many Loves of Dobie Gillis