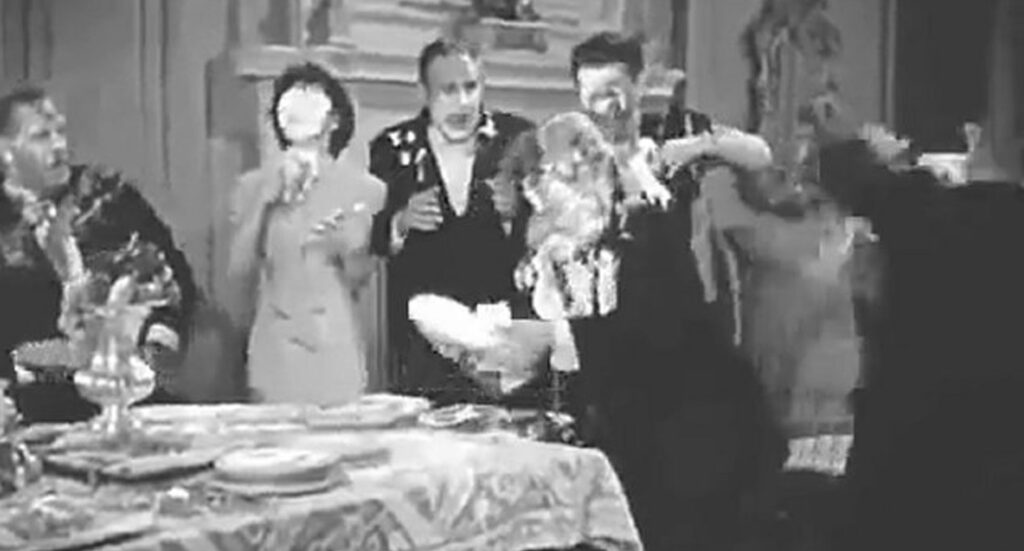 Today, we see when the Three Stooges first got into a pie fight in one of their short films.

The Three Stooges were a popular vaudeville act who then starred nearly 200 short films at Columbia as a comedy trio between 1934 and 1958. The group had initially featured Moe Howard, his older brother Shemp and comedian Larry Fine, but before their short film career began, Shemp left and was replaced by the Howard’s younger brother, Curly. In 1946, Curly suffered a stroke. Shemp didn’t want to return, but he knew that without him, the group would likely fall apart (as Curly had become the star of the group by that point) and he didn’t want that for his brother, so he agreed to fill in until Curly recovered. Sadly, Curly died later in 1946, but Shemp continued with the group until his own death in 1955. The Stooges then used Joe Besser as one last fill-in before their short film days ended in 1958. Interestingly enough, they ended just in time for their popularity to explode, as Columbia sold all of their short films into television syndication and they were huge hits on TV…with material that was now decades old that they didn’t make a dime off of.

In any event, especially during the Curly years, the Stooges became known for their slapstick almost cartoon-like comedy. It was VERY popular with children. One of the most famous types of Stooge comedy pieces was pie fights. But when did they FIRST have a pie fight?

Amazingly enough, while I’m sure there were instances of a Stooge getting hit by a pie at some point during vaudeville or a film, their first outright pie fight didn’t occur until 1941’s “In The Sweet Pie and Pie.”

The Stooges play three gang members on Death Row. Three socialite sisters stand to inherit a fortune, but they have to be married first. Their lawyer convinces them to marry the three Death Row prisoners and when they are killed, the sisters will be free to do whatever they want with their money. The problem, of course, is that it turns out that the Stooges’ characters were falsely convicted. They get pardoned and now the women are stuck with their new husbands. Their lawyer comes up with an idea for a society party, assuming the uncouth Stooges won’t be able to behave themselves and he will be able to use their behavior to justify annulling the marriages.

However, the rich folks get a kick out of it and the women decide to remain married to their new husbands and the film ends with the lawyer fired and pelted with pies.

Larry Fine recalled the problems with filming the pie fights in 1982’s The Three Stooges Scrapbook (interview obviously from before he passed away in 1970):